Keep it in the ground!

While there is no formal space in the negotiations to talk about the one thing the climate needs most – the rapid and equitable phase out of all fossil fuels – there has been a flourishing ecology of side events making just this point. Yesterday, there were several debunking the curious idea that, in a climate emergency, we can keep expanding oil and gas. The latter is often – most often in oil company ad campaigns – seen as a “bridging fuel”. Perhaps advocates of this view just mean it’s a “bridge” to climate breakdown. There are certainly cleaner and more effective ways to achieve SDG7: “to ensure affordable, reliable sustainable and modern [surely this is the antithesis of ‘fossil'] energy for all.”

A report launched by the Stockholm Environment Institute, Climate Analytics, and other research organisations this week laid out the discrepancy between countries’ planned fossil fuel production and global production levels consistent with limiting warming to 1.5°C or 2°C. It’s carbon-bombingly, climate changingly big: 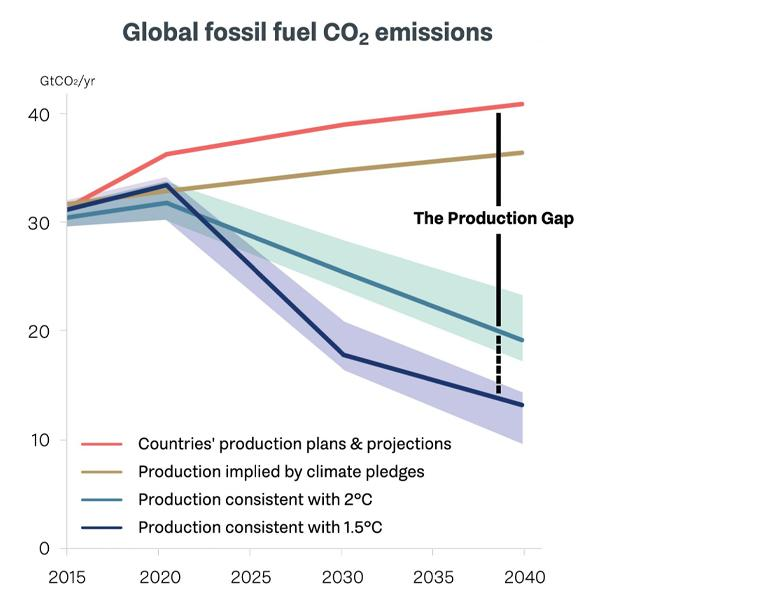 At another side event, an advisor to the Climate Vulnerable Forum called upon “Governments and multilateral institutions [to] take bold and decisive leadership to limit fossil fuel production and end the expansion of this industry…. This is a time when real, decisive leadership is needed. Leadership that does not mean simply defending historical, fossil fuel-dominated energy demand but actually helping governments limit warming to 1.5C by 2050.

In the evening, Pacific Islanders spoke of the havoc being wrought on their homes and of people already having to relocate because of the fossil industry’s products and the sea level rise these are causing.

Today, planetary destroyers BP, Shell and Chevron sought to deflect attention from their culpability with a  riveting manel (or man-only panel) on the theme of ‘markets for nature-based solutions’. But biological carbon sinks cannot bridge the fossil production gap. Protesters covered their ears and silently walked out.

In all seriousness, ECO asks Parties to go away and consider how they can close the fossil production gap. And we especially expect the wealthiest fossil fuel producers to sprint into the lead. Ending international fossil fuel subsidies of at least US$775 billion to US$1 trillion per year would seem like a good start.

Not using public money to fund fossil expansion would be another. Elsewhere on the grounds outside IFEMA, ECO saw some wild pikachus demanding that Japan and other G20 countries do just that. Fortunately, the European Investment Bank’s energy lending policy now ends fossil lending (including oil and gas) after 2021 – the other Multilateral Development Banks, which are trendsetters in financial flows, need to follow the EIB’s lead and surpass them.